Communiqué from the Gafcon Primates Council

For the message of the cross is foolishness to those who are perishing, but to us who are being saved it is the power of God.  1 Cor 1:18

To all the faithful members of Gafcon throughout the world, and to all friends in Christ, greetings in the name of the Lord Jesus.

1. Our Meeting in Kigali, Rwanda

The Gafcon Primates Council celebrated their first face to face meeting (without masks) in over three years when they met in Kigali, Rwanda from October 17-19, 2022. We experienced lavish hospitality from Archbishop Laurent Mbanda. We found it poignant to meet in the place which experienced the depths of human anguish in the genocide of 1994 to the extraordinary demonstration of redemption and forgiveness that has transformed this nation in amazing ways. It has been deeply challenging to see how we need to experience and share that same transformation, in and through our own lives.

We agonized at the news that our brothers and sisters in Uganda, having had a devastating experience of COVID-19 and a tragic famine, claiming far too many lives, are now dealing with an outbreak of Ebola in four areas of the country. We prayed with Ugandan Archbishop Stephen Kaziimba who was present in our meeting, and we also prayed for our brothers and sisters in Uganda who are struggling under these circumstances.

We were invited to meet the Minister for Foreign Affairs and International Cooperation,  the Honorable Vincent Biruta, in his offices. He welcomed us to Rwanda and offered his support to the smooth running of GAFCON IV, to be held in Kigali in the week of 17- 21 April, 2023.

In our gathering, we engaged in Bible study every day, heard reports from around the world, and worked on plans for GAFCON IV, as we look forward to the spiritual refreshment and life-giving enrichment that we experienced in three previous GAFCON gatherings. Those who live in areas of persecution have shared that they found encouragement from knowing  that they are not alone.

We were able to connect by zoom with GAFCON General Secretary, Archbishop Ben Kwashi,  who is in the USA for cancer treatment. We rejoiced to hear his testimony of miraculous healing that he has experienced. It was wonderful news to hear how the prayers of friends around the world have sustained him and have given him a demonstration of God’s gracious healing.

We continue to pray for our brother that the Lord may restore him to full health.

The original GAFCON in Jerusalem in 2008 was born out of the tragic cost that has come from Provinces that have departed from clear biblical teaching and established historic Anglican Formularies that were unquestioned until recent years. Those departures continue and are even spreading. We were deeply grieved by the recent appointment of a man who lives in a same-sex civil partnership as Dean of Canterbury Cathedral. It is a heartbreaking provocation that such a departure from biblical standards would be thrust upon the Communion in the historic See of Canterbury and in opposition to the established teaching and practice of the majority of Anglicans.

The announcement from the Archbishop of Canterbury distanced himself from this appointment, as it was the recommendation of a Selection Panel, requiring the Queen’s  approval. Yet it is difficult to see how a Diocesan Bishop, let alone the Archbishop of Canterbury, could not influence the appointment of the Dean of his own Cathedral, especially given the published process for the Appointment of Deans. Moreover, filling this position was the responsibility of Mr Stephen Knott, the Archbishop’s Secretary for Appointments, who is himself in a same-sex marriage. It is disingenuous, if not duplicitous, for the Archbishop to claim that the Church of England has not changed its doctrine of marriage, when he has engaged an Appointments Secretary, whose own union is a living contradiction of marriage as God has ordained it, and which the Church of England claims to uphold. By empowering Mr Knott to oversee the appointments of senior positions in the Church of England, it is hardly surprising that the recommended nominee was likewise in a same-sex relationship. Clearly, the process for appointing senior positions in the Church of England needs to be reformed, so that decisions are in the hands of those who abide by the teaching of the Church of England, especially in relation to same-sex marriage and civil partnerships, which are generally perceived as a cloak for homosexual activity.

Furthermore, while Dean David Monteith’s long term civil partnership may have gone under the radar in Leicester Cathedral, the moral character of the Dean of Canterbury has ramifications for the whole Communion. Canterbury has a place in our history which needs to be preserved, rather than undermined. At the recent Lambeth Conference, the Archbishop of Canterbury affirmed Resolution I.10 of the 1998 Lambeth Conference. Regrettably, the Archbishop will be perceived as advocating the very opposite of this resolution by refusing to prevent this appointment. The so-called instrument of unity has sadly become an instrument of disunity. The tear in the fabric of the Communion has only deepened, perhaps irreparably.

The Anglican Communion evolved as a communion of Churches who held to the Reformation Formularies. Yet the Anglican Communion has over the last twenty-five years slowly but irretrievably abandoned the clear teaching of Scripture on not only matters of human sexuality but the very nature of the gospel. Yet those who remain true to the teaching of Scripture, especially in upholding Resolution I.10, are the true inheritors of the Anglican Communion. By contrast, the Canterbury Communion best describes those who accept the double speak of saying Resolution I.10 is our doctrine, but it is all right to disown it, because “we have studied the Scriptures over many years and prayed about it”. One can only wonder what Athanasius would have said if Arius had made the same claim! Yet those on two divergent paths cannot walk together, as the Council of Nicaea clearly demonstrated. We deeply lament the advocacy for unbiblical practice, and the promotion of those whose lives betray an abandonment of Christian morality. The Archbishop of Canterbury has become complicit in this trend, while providing little support for biblical orthodoxy, or offering any support for those orthodox Anglicans who are mistreated in their provinces by the revisionist agenda of bishops who defy not only Resolution I.10, but the clear teaching of Jesus in Matthew 19:4-9.

We rejoice that our brothers and sisters in the Global South Fellowship of Anglican Churches (GSFA) have taken a strong stand for the Gospel, particularly addressing the recent appointment at Canterbury Cathedral. We also appreciated their faithful witness at the recent Lambeth Conference. Global South representatives spoke in support of the biblical position of Resolution 1.10 as revisionists sought to push forward their agenda.  Powerfully, Global South leaders said, “Though we have gathered together, we are not walking together.” We see GSFA as a sister movement, not as a competitor, but as a Gospel partner. As our constituencies overlap significantly, we look forward with anticipation to ways in which we can mutually cooperate with GSFA.

As Gafcon leaders, we agree with those from the Global South who pointed out that the Archbishop of Canterbury has departed from the authentic exercise of his office by normalizing and praising those who have departed from biblical teaching and practice, and  giving equal place to practices that are contrary to biblical norms, as Anglicans have  received them. We urge him to repent.

We lamented the situation in Australia, where a majority of Diocesan Bishops could not give their assent to the doctrine of the Anglican Church of Australia, that marriage is the exclusive union of a man and a woman. We welcomed the establishment of the Diocese of the Southern Cross in Australia to provide a lifeboat for those Anglicans who could no longer remain under the jurisdiction of revisionist bishops.

The Primates also affirmed the desire of the Church of England Evangelical Council (CEEC) to maintain commitment to Resolution I.10, and authorised Mr Martin Mills to represent  Gafcon in meetings of the CEEC.

Though our history is short, dating only from 2008, our Gospel message is enduring. To ensure our longevity, we continue to welcome new members, leaders, Bishops and  Archbishops. At this meeting we replaced two of our longstanding Guarantors who have now retired, Archbishop Peter Jensen and Bishop Michael Nazir-Ali. We are thankful to God for their faithful service to Gafcon. The Primates elected Mr. Olayinka Fisher of Nigeria and  Dr. Glenn Davies from Sydney to serve as Guarantors. The Guarantors serve as guardians, ensuring that Gafcon stays faithful to “the faith once delivered to the saints.” We welcome these new Guarantors and thank God for their commitment.

Our plans are moving forward for GAFCON IV, with its theme of “To Whom Shall We Go?”  Each of the GAFCON gatherings has provided great encouragement and spiritual nourishment. The challenges we face globally have only increased in intensity since our first meeting in Jerusalem in 2008. We rejoice that GAFCON IV will provide an encouraging environment filled with celebration, resources, testimonies, edifying content and experiences. Our message is clear. Come to Kigali for GAFCON IV. You will not be disappointed!

We celebrate the upcoming consecration of three missionary Bishops for the Anglican Network in Europe to engage in church planting and to care for those clergy and congregations who have committed to promote biblical faith, in the context of other  churches who are increasingly rebelling against the clear teaching of Scripture. Video greetings and congratulations were recorded to be shared with the new Bishops.

Thanks were expressed for the efforts of the Rev Canon Daniel Willis (Gafcon Operations  Manager) and Mr Paul Mirrington (Conference Manager) for their efforts, and the work of  the Regional Secretaries, Branch Chairs, and all others who are working so hard to ensure that as many people as possible are able to attend GAFCON IV. The Primates Council urges those in wealthier parts of the world to consider offering bursaries to those who cannot afford to come, and to consider offering help even if they are not able to go themselves.

Our prayer is that GAFCON IV will be a blessing to many people as they seek to live faithfully as disciples of Christ to the glory of God. Amen. 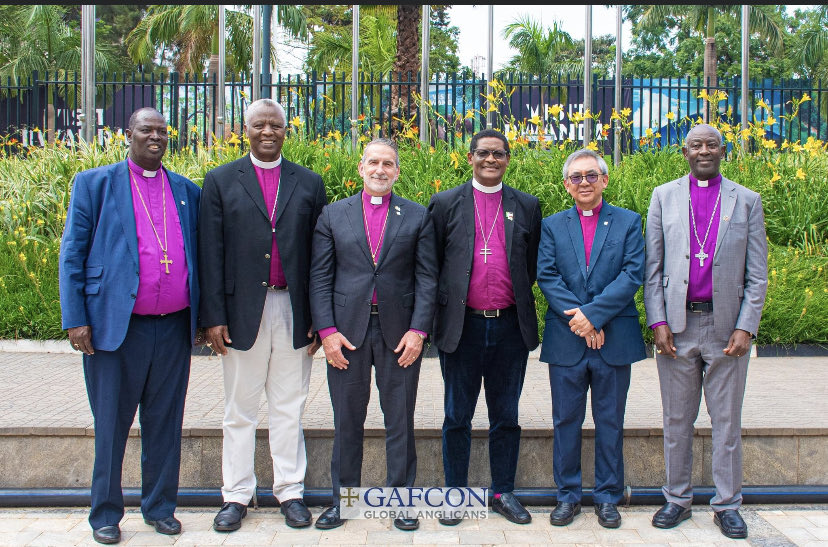