Pope Emeritus Benedict XVI, died, aged 95, on 31st December.
The first Pope in nearly 600 years to resign, he is known by Catholics for his strong conservative views and defence of religious orthodoxy. There remain profound differences between the theology of the Roman Catholic Church and the reformation heritage of Anglicanism, but it’s important to recognise the contribution that this remarkable theologian and leader made to articulating conservative Christianity in the secular West.

Here are some extracts from a BBC article:
Benedict: The pope who resigned from the papacy - BBC News
…he became an enthusiastic advocate of orthodoxy and continuity, a firm bulwark against dissent [from the church’s historic teachings] in what he considered to be an increasingly disjointed and permissive world….
… During the 1980s, he spearheaded the Church's campaign against "liberation theology", a potent blend of Catholicism and Marxism particularly popular in Latin America…
…Later, he would attack what he saw as "religious relativism", the belief that no one faith can claim to be the sole vessel of truth or to represent the world's only saviour… the Pope believed interfaith dialogue was difficult while Christians were denied religious freedom in some Muslim countries…
… His state visit to the UK in September 2010, the first ever by a reigning Pope, was an opportunity for him to speak out against the critics of organised religion.
"Today, the United Kingdom strives to be a modern and multicultural society. In this challenging enterprise, may it always maintain its respect for those traditional values and cultural expressions that more aggressive forms of secularism no longer value or even tolerate."
… Like his mentor, John Paul II, Pope Benedict believed there was a completely Christian alternative to the humanistic philosophies of the 20th Century: Marxism, materialism and liberalism.
But he believed that Christianity's influence would "rise again like the mustard seed, in insignificantly small groups whose members intensively live in combat with what is evil in the world, while demonstrating what is good."
There was some controversy however, when he was accused of covering up abuse while a bishop. Although it’s recognised that when he became Pope he took a much harder line against abuse in the church, this is a salutary example of the need for transparency and proper safeguarding procedures in all churches including our own.

A selection of other articles follow…
Benedict XVI: Apostle of Hope - Public Discourse (thepublicdiscourse.com)
Pope Benedict XVI: towering intellect and deep piety | The Spectator Australia
The torment of Pope Benedict - UnHerd
Benedict XVI dead at 95: The ‘humble worker’ and his legacy of hope to the Catholic Church | Catholic News Agency
Pope Benedict XVI: A man at odds with the modern world who leaves a legacy of intellectual brilliance and controversy (theconversation.com)

The King has approved the nomination of The Reverend Dr Robert Munro, Rector of the Benefice of St Mary’s Cheadle with St Cuthbert’s, in the Diocese of Chester, and Rural Dean of Cheadle, to the Suffragan See of Ebbsfleet, in the Diocese of Canterbury. This is in succession to The Right Reverend Rod Thomas following his retirement in a national role previously conducted by the Suffragan See of Maidstone. Government announcement here.
The Rev Dr Rob Munro trained for ministry at Oak Hill College, studied for his doctorate at Reformed Theological Seminary in the USA, and has been the Rector of Cheadle for 19 years. He has also served on General Synod, is a member of the Dioceses’ Commission, chairs the House of Clergy for Chester Diocese, is the Chair of the Fellowship of Word & Spirit, and is on the Councils of Latimer Trust and Church Society. See: The Bishop of Ebbsfleet - Announcement
See also: Rob Munro named as next Bishop of Ebbsfleet (christiantoday.com)

King Charles gave his first Christmas address on Christmas day and paid tribute to his late mother. Click here for full text. However, some have expressed concerns. Read here.

A public response to the Bishop of Southwark

Coming only a few weeks after the Office of National Statistics revealed the sharp fall in people describing themselves as ‘Christian’, the Church of England published its Statistics for Mission 2021 on 6th December. The figures, which came from an in-person attendance survey in October 2021, show that church numbers have declined in all but three CofE dioceses and that across all English dioceses, church attendance was 72% of what it was in 2019.
See also Statistics for Mission 2021 published | Thinking Anglicans and Telegraph articles: Senior clergy warn of ‘shocking’ threat to parishes amid drastic fall in churchgoers. and The Church of England is neglecting its heart and soul.

Following the imposition of exclusion zones and the ban on prayer and protest outside abortion centres, a Catholic believer who was silently praying in her mind near the BPAS Centre in Birmingham, has been arrested and charged with four counts of failing to comply with a Public Space Protection Order.

In Nigeria there have been renewed attacks against Christians. See Nigeria: renewed attacks in southern Kaduna claim over 40 lives - CSW and Again, gunmen attack Kaduna community on Christmas day, 'kill one, abduct 45' (withinnigeria.com)

Ongoing but silenced persecution of Christians is pointing towards The Death of Christianity in Bethlehem :: Gatestone Institute

Bishops - a concise study by Martin Davie is a book summarising the key points of his much longer ‘Bishops Past Present and Future’. Leadership within the wider family is vital for the longer-term welfare of the church and amongst Anglicans this means thinking carefully about the office and role of bishops. In this book Martin Davie provides detailed answers to three key questions: ‘Why should the Church of England have bishops?’ ‘What is the proper role of bishops?’ and ‘How should bishops respond to the challenges facing the Church of England and the church in the West in general?’ As the preface states ‘here we see an outline of how orthodox bishops can exercise a faithful ministry in the present Anglican context’.

Theology Ireland:
JESUS: THE CHURCH'S ONE FOUNDATION
Why bother with church?
What do we do when we are at church? Do we need the church?
Christ loved the church and gave himself up for her. Therefore, it matters how we think about church.

This course, with Rev'd Dr Mark Earngey of Moore College, Sydney, will look at how brothers and sisters during the Reformation strove to return to the truth of the Bible, why that matters for us today and the very real need for God’s people to be devoted to Him and devoted to His Word. The course will also examine church practice, looking at questions such as What is the Book of Common Prayer? Why do we use it – and is it still worth using? What are the sacraments? And how does the Church relate to the world in which we live?

Join online on both of the Mondays (23/1 and 30/1) for the first session of that week and then choose either the Tuesday or Thursday of that week for the second session. Each evening begins at 7.30, concluding at 9.30. The live broadcast will begin at 7.15pm.

Some thoughts from J.C.Ryle
J.C.Ryle commenting on the Gospel reading for Epiphany Sunday (Matthew 2:1-12) lists five things that these verses show us:
There may be true servants of God in places where we should not expect to find them.

There may be knowledge of Scripture in the head, while there is no grace in the heart

A splendid example of spiritual diligence.

A striking example of faith. 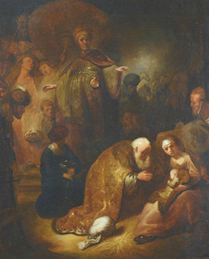 As we start the New Year, remembering that ‘God uses us in prayer in places where our feet cannot go’, please join us in prayer at our weekly prayer meetings.

The ANiE prayer meeting this month is on Friday 6 January 9 am GMT with an interview with Hassan John of the Church of Nigeria. Please email chai.yeo@anglicannetwork.org  to get the zoom link. All are welcome.

Please also continue to pray for Gafcon IV in Kigali (17-21 April) as preparations are made, delegate numbers are finalised and their finances are raised. Further details will be sent to delegates in separate mailings in February/March.

Collect for Epiphany – 6th January. (B.C.P.)
O God, who by the leading of a star didst manifest thy only-begotten Son to the Gentiles: Mercifully grant, that we, which know thee now by faith, may after this life have the fruition of thy glorious Godhead; through Jesus Christ our Lord. Amen.

Collect for the First Sunday after the Epiphany (B.C.P.)
O Lord, we beseech thee mercifully to receive the prayers of thy people which call upon thee; and grant that they may both perceive and know what things they ought to do, and also may have grace and power faithfully to fulfil the same; through Jesus Christ our Lord. Amen