The Lambeth Conference was held in Canterbury from 26th July to 8th August. At the opening service the Archbishop of Canterbury acknowledged a broken fellowship. Some of those attending did not receive bread and wine because of the presence of bishops openly promoting false teaching in the area of sex and marriage. Most Gafcon bishops chose not to attend, and others, recognised by Gafcon but not by Canterbury, were not invited.

Throughout the gathering Archbishop Welby, as expected, stressed the importance of putting aside differences and demonstrating unity for the sake of witnessing to God’s love in the world. One way in which he and the Conference organisers attempted to achieve this was by following a middle way, neither affirming Lambeth Resolution I:10 (1998) as the normative teaching of the Communion on sexual ethics, nor repudiating it. The result was, sadly, what appeared to most commentators to be a fudge, whereby both those who are committed to following the clear teaching of Scripture in matters of faith and ethics, and those who have come to an understanding more acceptable to Western secular culture, were both affirmed as people of prayer and study of the word. 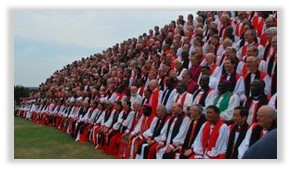 “…rather than being a source of healing and unity, the Lambeth Conference …was filled with confusion”
Archbishop Foley Beach, Chairman of Gafcon, comments on Lambeth

The delegates from the Global South Fellowship of Anglicans (GSFA) gained well-deserved publicity for their stand for biblical faithfulness. Agreeing together on doctrine with the absent GAFCON leaders whose absence from the Conference was a witness in itself, GSFA led admirably by Archbishop Justin Badi of Sudan came with the intention to “call on those who have departed from apostolic and prophetic teaching to repent and return to obedience to the truth”. A Communique, released by GSFA just before the end of the Conference, declared the intention of orthodox leaders “to work towards resetting the Communion on its biblical foundation both in faith and in practice”, while continuing the urgent task of proclaiming the good news of the gospel.

Gafcon and GSFA as organisations are not working for different goals. There is much overlap between the two. Both want an Anglicanism which is an expression of  orthodox understanding of Christian faith based on the bible. In terms of strategy, GSFA are more optimistic about achieving this by robustly calling for a return to orthodoxy within the Canterbury structures; Gafcon are more willing to differentiate from those structures, and take principled action to create new Anglican jurisdictions where there is “unchecked revisionism” (a phrase from the Communique) in the leadership of a Province or region.

In the coming months and years, much prayer is needed for unity among the leaders of GSFA and Gafcon, as they work together towards the right kind of organisation which is the best vehicle for global, faithful Anglican gospel ministry.

Kigali 2023 – the Gafcon gathering in the capital of Rwanda.

Please read this letter from the Treasurer of Gafcon GBE:

Would you, or your church, consider making a one-off contribution to help with Gafcon Great Britain and Europe (GB&E) branch expenses?

Every five years Anglican delegates from around the world join together to assess the opportunities and challenges for the gospel in 21st century culture and enjoy fellowship together. Gafcon GB&E wishes to be very much a part of the next conference in Kigali in April 2023.

The Jerusalem Statement and Declaration developed in the inaugural conference which took place in 2008 is an affirmation that we stand by the founding principles and doctrines of the church which are rooted in Scripture. This is against the background of secularism in Western society that is influencing the church, weakening confidence in the gospel, undermining the spiritual authority of leaders and causing division.

Gafcon GB&E is a small organisation and relies completely on donations which it uses to support its membership and reach its wide readership. We want to make a significant contribution to the conference and will surely benefit greatly from attending.  If you would like to donate towards the increased costs arising from the Conference, please give using the link here

Anglican Network in Europe (ANiE) is authorised and overseen by Gafcon. Bishop Andy Lines describes the Network as a “lifeboat fleet with an urgent mission to provide hope in Christ”. It would be great if as many clergy and lay leaders as possible could attend the Kigali Conference. If any Gafcon GBE members are not planning to attend but could sponsor a delegate, please click here to read Bishop Andy’s letter and find bank details etc.

On October 21st the Anglican Network in Europe plans to celebrate the consecration of four new bishops. They will assist Bishop Andy Lines as he leads the growing alternative to Canterbury-aligned structures in Europe.
The consecration service will take place in Hull on 21st October, led by Bishop Andy Lines and Archbishop Foley Beach, Primate of the Anglican Church in North America and Chairman of the Gafcon Primates’ Council.
Click here for all the details, including how you can book your free ticket to the service or the livestream.

Gafcon has authorised the formation of a new Anglican home for faithful Christians, the ‘Diocese of the Southern Cross’. This was announced at the big GAFCON Australasia Conference in Canberra in mid August, and follows the creation of the Church of Confessing Anglicans in Aotearoa New Zealand in 2018. Critics have labelled the move schismatic and unnecessary, saying that that the new jurisdiction is not Anglican. Some bishops have already begun moves to intimidate those associated with the Gafcon project. But Gafcon Australia Chairman Bishop Richard Condie has said this new extra-Provincial Diocese is a necessary response to false teachers who have rejected Biblical and Anglican doctrine, and it is they who are responsible for the current Australian church schism.

Interviews with key Gafcon leaders (on ‘The Pastor’s Heart’) here

Please pray for Anglicans committed to orthodoxy in Australia, especially the members of Gafcon Australia; those who are going to remain in the Anglican Church of Australia and those considering a move to the Diocese of the Southern Cross.

Traditional Methodists search for new path forward, by Mark Tooley, writing in The Gospel Coalition
The 13-million-member United Methodist Church is shattering, and traditionalists are building a new Global Methodist Church committed to theological and ethical Christian orthodoxy. Are the new wineskins of a new denomination preferable to remaining a faithful witness within an old denomination?

When Churches Go Bad: Fight or Flight?  Bill Muehlenberg comments on the Australia situation from the perspective of anon-Anglican ( CultureWatch):
“Sometimes faithful Christians feel led to stay and fight, and resist those who are seeking to destroy historic biblical Christianity. But sometimes it is wiser to leave an all-too corrupt body, and form a new one with other orthodox believers.”

What does disunity say? Jon Bloom, in a blog on the Desiring God website, says there are three main types of division: those caused by sinful behaviour (ie, people falling out), those caused by different rates of maturity and growth, and those caused by false teaching and heresy.