Church of England and teaching on sexuality, relationships and marriage

Two new reports have been released in September as a follow-on to the Living in Love and Faith process. The Church of England’s website says:
As part of the church-wide engagement with the Living in Love and Faith resources, everyone who took part was invited to share their learning, insights and reflections… These responses have been gathered into a report, Listening with Love and Faith. This is accompanied by a more detailed technical report and a reflective essay entitled, Friendship and the Body of Christ. These and the LLF resources will support the bishops in their ongoing discernment process as they seek to discern what they believe God is saying to the Church of England today. 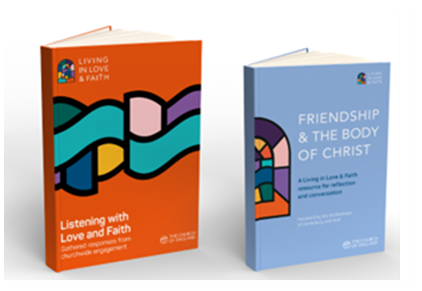 This process appears to be leading in the same direction as the Lambeth Conference’s “Call to Human Dignity”. The conference leaders attempted to affirm two mutually contradictory views on sexuality and more broadly, on how the bible functions in the life of the church. Scottish and Welsh Bishops have followed this path – will English bishops do the same? Much prayer is needed!

Church Society have produced a superb analysis of the ‘Listening’ document,showing the flaws in the research methodology and concluding that is should not be used as a basis on which to attempt to bring about a change in doctrine and practice.

Martin Davie has written a critique of the ‘Friendship’ resource. Among other problems, it appears to minimise sin, implying that friendship with Christ and one another means we accept one another unconditionally despite differences:
“It is a significant weakness of ‘Friendship and the Body of Christ’ that it fails to address the issue of the need to distinguish between different sorts of disagreement and also …whether there are some forms of conduct that are so serious that the person committing them ceases to be a friend of Jesus.”

Influential theologian Walter Brueggemann’s essay on ‘How to Read the Bible on Homosexuality’ has been helpfully deconstructed and his arguments refuted by Ian Paul, who makes reference to wider theological thinking on the subject, and restates why we can have confidence in the bible as God’s word.

Gafcon GBE chair Martin Mills was at ReNew for the annual gathering of evangelical Anglican clergy and other leaders. He reports:

The ReNew conference, held on 26/27 September in Leeds, was a time for gathering orthodox Anglican evangelicals (Clergy and Laity) across 35 regional church groups, from the Church of England and other Anglican jurisdictions. The conference theme was Abiding in Christ with readings from John 15/16 with an emphasis of building partnerships to proclaim the gospel around the country. In addition, there was a series of bible teaching on endurance, covering fruit that endures, churches that endure, leaders that endure .

Gafcon was well represented at the conference with key speakers Kanishka Raffel, Archbishop of Sydney, and Bishop Jay Behan, from New Zealand, providing bible teaching and sharing their wisdom on visible differentiation to help inform the thinking that churches will be doing next year to stand firm for orthodoxy in partnership with one another. Next year's conference dates are 25/26 September 2023 at the same venue in Leeds. More details can be found on the ReNew website: renewconference.org.uk

On October 21st the Anglican Network in Europe plans to celebrate the consecration of new bishops, Ian Ferguson and Stuart Bell for ACE, announced here ANiE and ACE and Lee McMunn/Tim Davies for AMiE. They will assist Bishop Andy Lines as he leads the growing alternative to Canterbury-aligned structures in Europe.
The consecration service will take place in Hull on 21st October, led by Bishop Andy Lines and Archbishop Foley Beach, Primate of the Anglican Church in North America and Chairman of the Gafcon Primates’ Council.
Click here for all the details, including how you can book your free ticket to the service or the livestream.

“Welcome home!” The morning after the consecration, on Saturday 22ndOctober, there will be an opportunity to learn more about the Gafcon-authorised Anglican Network in Europe from a variety of speakers, from the UK and around the world. Hear about how Anglicanism can be faithful to the gospel and reformation truth with a vision for mission; how a relational model of episcopacy can bring oversight with fellowship, encouragement and accountability. Plenty of time for Q&A. Book your place here.

The Gafcon Primates (senior Archbishops), Guarantors (those giving governance oversight) and other leaders will be meeting in Kigali on 15-20 October for prayer, planning and decision-making. On the agenda will be the organisation of the fourth global Conference in Kigali in April, responding to issues arising from the Lambeth Conference, and seeking the Holy Spirit’s wisdom in how to respond in a united and effective way to major challenges facing nations around the world. Please pray, especially for Archbishops Foley Beach and Ben Kwashi, and those helping to organise behind the scenes.