From 17-19 October 2022, the Primates of Gafcon-aligned Provinces and other leaders of regional branches met in Kigali, Rwanda. Great Britain and Europe was represented by GGBE Chair, Martin Mills, former Church Warden of All Souls Langham Place and now co-opted observer on the Church of England Evangelical Council; also Bishop Andy Lines from ANiE.

Some excerpts from Martin’s report:

1. Each day began with devotions and prayer led by a Regional Secretary (including our own Andy). These laid the daily unifying foundations necessary for us all to centre on Jesus Christ, the author and sustainer of the global Church. I was struck how united the Primates were in the Gafcon cause, to make Jesus known through the outward, visible, demonstration of the historic Anglican theology and to stand firm when challenged by a different gospel. Please pray for Gafcon’s resolute advance and defence of the gospel, and care of the persecuted church.

2. The Communique from the Council has a call for the Archbishop of Canterbury to repent. Please pray that this message will have an impact of reversing the trend of churches/nations departing from the biblical and historic Anglican teaching on marriage and sexuality, and other matters. Archbishop Foley compared the large team running the Canterbury communion with the small team in Gafcon supported by volunteers. May the Lord turn our weakness into strength for his glory. A finance review is being undertaken to see how the resource pressures can be eased.

3. The choice of venue was poignant. Rwanda suffered the genocide of 1million Tutsi being slaughtered in just 100 days in 1994. This tragedy is being redeemed by the Lord through the work of the church who are at the heart of transforming the land with healing, gospel teaching and commercial regeneration...for funding the church, education and medical services while providing employment to locals.

An agriculture project in Rwanda

Let us praise God for this remarkable social, economic, and gospel transformation in Rwanda. Can we pray that God would transform our churches in similar ways?

4. The Primates spent time planning out the Kigali conference in April 2023. There was a recognition that the Anglican Communion needs Gafcon more than ever after Lambeth and we need to maximise attendance. This will require us to share resources with those who have less. Pray that the pressing need for this gathering sees a surge in registrations, in generous giving through bursaries and in meticulous planning; that the work of the speakers and discussion groups around the theme of “To who shall we go?” would result in a closer walk with Christ, impetus in mission, and lasting impact.

5. Encouragingly we were joined by zoom for some of the time by the Gafcon General Secretary, Ben Kwashi. He is recovering from ill health and is thankful that he is hoping to return to Jos by the end of the year. Please continue to pray for his health.

6. Finally, I would be grateful for prayer for the work of the Gafcon GB & Europe branch. May it provide hope and a home as we build faithful fellowship in the gospel at grassroots level. 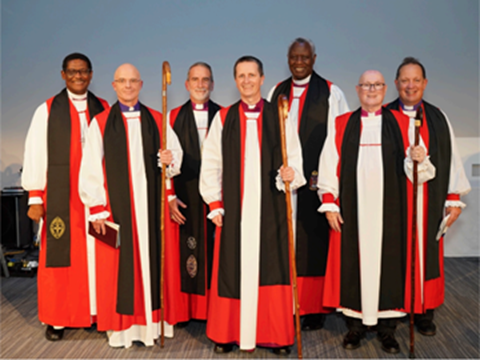 …The bishop currently overseeing both dioceses isAndy Lines, former director of Crosslinks…consecrated by ACNA in 2017. Each diocese has now elected two suffragan bishops – Tim Davies (Sheffield) and Lee McMunn (Scarborough) for AMiE; alongside Stuart Bell (Wales) and Ian Ferguson (Scotland) for ACE. Bell was absent from Hull because of ministry commitments at the Garden Tomb in Jerusalem, so is due to be consecrated in Wales in spring 2023.”

“The reason for the formation of ANiE is not just a desire to get on with mission that is evangelical in theology and unencumbered by traditional administrative structures…. Rather, the problem is “the acceptance and promotion within the provinces of the Anglican Communion of a different ‘gospel’…which is contrary to the apostolic gospel.” Action is required, and sadly this involves … the formation of new structures within which biblically faithful Anglicanism can flourish.”

The Anglican Network in Europe may be in its infancy, but it is quickly gaining credibility as an authentic and viable home for historic, orthodox, faithful, Biblical, confessional Anglicans across Europe. Many of those who attended the consecration were to gather again in the morning to hear what the Anglican Network in Europe might have to offer should the Church of England choose to follow the progressive agenda of the Scottish Episcopal Church and Church in Wales…

In the light of unsettling pluralism within Canterbury-aligned Anglican structures, those seeking a safe home will be reassured that there is a genuine and authentic Anglican alternative to compromise and cultural capitulation…In his sermon, Archbishop Mbanda encouraged the new bishops to take care of their own physical and spiritual lives, to beware of the wolves and to protect the people they serve through the faithful preaching of the gospel….Archbishop Ndukuba said “The mission field is clear. As Jesus said, lift up your eyes, and see that the fields are white for harvest (John 4v35). We are here to encourage you.”

The Church Times reports a survey in which more than 1100 licensed priests in the Church of England have indicated that they are willing to conduct same-sex marriages if they become legal.

The Bishop of Oxford has written a detailed essay explaining publicly why he is in favour of same sex marriage in the Church of England. Other bishops have supported his stance. Ian Paul has written an excellent response here.

Andrew Goddard has written detailed analysis and commentary on the issues facing the Church of England bishops as they consider what recommendations to make following the Living in Love and Faith process:

Discernment and decision following Living in Love and Faith

What are the practical implications following Living in Love and Faith?

Meanwhile, Evangelicals opposed to the introduction of same-sex marriage in the Church of England have had meetings with bishops. A Church Times report refers to CEEC’s call for a “settlement” in the form of a new provincial structure protecting orthodox belief and practice, rather than a split or compromise if the C of E formally endorses blessing of same sex relationships.

Church of England’s continued support for transgender ideology: Please continue to pray for the brave teacher, pseudonym ‘Hannah’, who has taken her school to court for its damaging policy of encouraging children to be affirmed in whichever gender they choose. Increasing numbers of secular journalists, authors and even MP’s are highlighting the long term dangers of transgender ideology, but the school so far is backed by Stonewall, Mermaids, the local authority and…the Church of England Education Department. Read more here.

The ’Greater Love Declaration’ is a statement of classic, orthodox Christian teaching on marriage, sex and identity, which ministers are encouraged to sign. It explains briefly why it is so important for the church to teach clearly in this area, and to resist calls or threats to ignore or deviate from the bible’s position. Dr Julie Maxwell, one of the authors.

Finally, Christ The King Anglican Church, Algarve is recruiting for a Minister to lead the church. Details are here